In an astonishing turn of events, the Timberlane Budget Committee voted tonight to instruct Dr. Metzler to cut $5.5 million from the next budget draft.  The superintendent has been instructed to return with a $69.6 million draft II budget.  First draft was $75.1 million, a 4.7% increase over this year’s budget.

During public comment, School Board Chairman Brian Boyle addressed the budget committee asking them to bring about a 18/19 proposed budget that would be 3% less than the current budget (17/18).

Danville representative, Shawn O’Neil, motioned to have draft II come in at 3% less than the 17/18 budget.

Dr. Metzler said this would mean cutting 100 staff. He sank his own boat when he noted that [under his administration] fixed costs go up $2 million every year.  At this the Representative from Sandown, Allan David, said the taxpayers of his town cannot support this. Others agreed.

The Timberlane Budget Committee voted 6-4-0 to have the draft budget returned to them at about $69.6 million.  The administration made the usual and now exceedingly tiresome moans about how they can’t possibly have the second draft by the next scheduled meeting on Nov. 30, so the chairman said they would review draft II on December 14th.

Mr. O’Neil said to Dr. Metzler that given that the school board had floated this number 6 weeks ago, “shame on you” for not being prepared for it.

If this is a dream, may I not wake up.  Finally a budget committee worth having.

Sandown residents, are you still reeling from the $30.78 per thousand tax rate, conveniently due two days after Christmas?

In yet more demonstration of a completely tone deaf school district management “team,” Timberlane’s draft one budget is asking for a $3.4 million INCREASE. We’re looking at the staggering ask of $75.1 million, up $3.347 million in one year. (Enrollment is still falling.)

Timberlane is the poster child for fiscal irresponsibility.  This draft is an insult to the will of the school board, to the beleaguered taxpayers of our district and especially to the oppressed taxpayers of Sandown and Danville.

School Board Chairman Boyle has been quite explicit.  He wants the budget DOWN by $3 million and the board agreed by straw poll that they wanted to see a significant decrease. Down by $3 million, up by $3 million – what’s the big deal?  Taxpayers in this district are a captive audience.  They can suck it up or they can sell their house with a depressed value.

It puzzles me profoundly that taxpayers prefer to suffer this unending abuse rather than assert their authority and undertake the education of their own children under their own management. Sandown is too large to be part of a cooperative district, especially one that knows no bounds on its fiscal appetites.

We all know draft one is just a draft.  With the mighty hand of God, the budget committee and the school board might be able to whittle it down by $1.5 million and think themselves heroic; meanwhile, draft one should have come in showing a $3 million DECREASE. It’s one big, insulting game on the back of your sweat.

I don’t know about you, but for me $30 per thousand is a psychological breaking point. Sandown’s property tax rate this year is $30.78.  We’ve outstripped even the notorious town of Danville which has a comparably attractive $28.25 per thousand this year.

Tax rates have to be understood in the context of property values, and though Sandown’s tax bills will not be going out until November 27th, I can be absolutely certain my property taxes will be going up at least $700 this year, and probably more.

The school district budget for next year is being drafted now and as usual the administration does not want to reveal their bottom line until the very last moment.  Your elected representatives let them get away with this strategic ploy every single year. The less time there is to react, the harder it is to marshal arguments and data against increases.

If you think this is good value and you are happy with 9% tax increases year after year, then I wish you the warmest of holiday cheer when you write your check to the Town of Sandown on Dec. 27th.  The rest of us will be wondering where it will end.

Tonight SAU 55 is holding a “public hearing” on their budget which becomes part of Timberlane’s budget.  It includes a new full-time staff position.  Why not?  You can’t do a darn thing about it.

It’s all one big, wet raspberry to the public.

My first year on the Timberlane School District Budget Committee was one of utter befuddlement.  The budcom passed a budget with a seemingly modest increase of 1.98%.  To my subsequent surprise and horror,  Sandown’s school taxes went up 9.5%.

How can small increases in a school district budget become so magnified at the town level?  Take 10 minutes to listen to a concise but fun explanation of how this happens.  You will gain fresh insight into the dynamics of school funding, making you the only person at your Christmas party to really know what is going on.

Those who wish to know more are invited to attend the School District Governance Association’s seminar on state education funding, “Downloading:  Fact or Myth?”

Blast from the Past

In reviewing old school board meeting clips, I came across this gem that so captures the attitude of the SAU to accountability, transparency, and their proper place in the peeking order.  This video clip captures an SAU board discussion about hiring a new full-time SAU employee.

Of course the superintendent never answered my question and of course the board voted for a new position.  October 2014.

Looking ahead to the proposed budget for Timberlane 2018/19, should we be interested in facts?

Also interesting would be facts about the district staffing.  The policy on this is “Don’t ask, don’t tell”.

I am not presently on Budcom, so I can both ask and tell.  Here’s the district staffing reported to NH DOE on the A12B reports submitted in mid-October.  (The numbers are full-time equivalents.)

Timberlane Test Scores Nothing to Hoot About

Timberlane Regional School District’s mascot is an owl. Unfortunately, the district’s latest academic results are nothing to hoot about. Both SAT and Smarter Balanced scores show the district hanging by a feather above the state average while spending $800 per student more than the state average. Compared to our comparable districts, though, we’re really in bad shape.  Timberlane spends $1,900 more per student for nearly identical average results.  The districts that outstrip us academically spend far less. 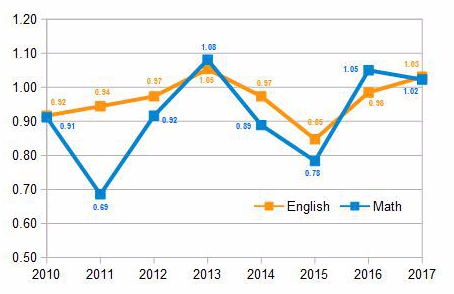 1:00 on the graph is the NH state average score; different tests were used in different years.  The most recent result (2017) was for SATs.

Let’s look at the cohort who wrote the 2017 SAT, the class of 2018, as they advanced through the grades… 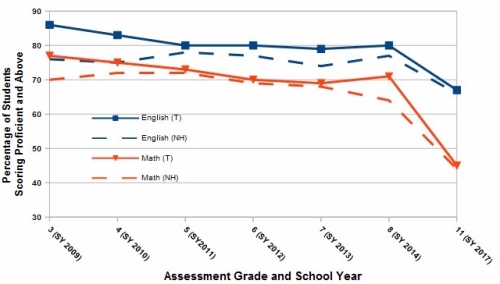 The solid line is the Timberlane score, the dashed line of the same color is the NH state average in the same subject area.  Note that this is a sequence of tests which are not strictly comparable as the assessment methods and tests change from year to year and from grade to grade.

Another way of visualizing the same information is through this scatter chart: 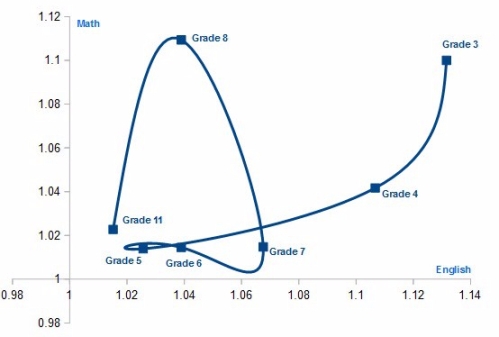 On this chart, points high and to the right are good, and movement downward and to the left is bad.  The axis crossing of (1,1) represents the state average in Math and English.  And the progress of the class of 2018 is from a strong starting point in Grade 3 diagonally downward to that average, with some hopeful improvements (Grade 7 English in 2013, Grade 8 Math in 2014) which did not hold up for the final Grade 11 assessment.